Bees In The News 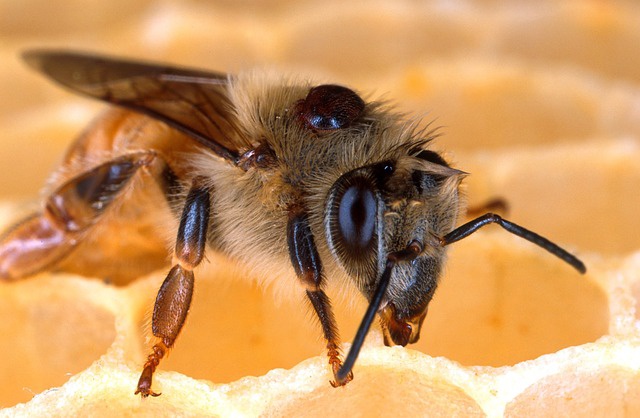 We all know the damaging effects that the appropriately named parasitic mite Varroa destructor can have on our honey bee colonies. The mites attach themselves to the bees and their larvae and feed on their host’s haemolymph. In their phoretic stage, they are transported on adult bees, and can thus spread between bees within the hive and between colonies through the processes of drifting, robbing and swarming of the bees.

As well as generally weakening the bees through their parasitism, the mites act as vectors for a number of harmful bee viruses. At low levels in bee populations these viruses may not cause significant harm, but high levels of varroa infestation may result in rapid spread of viruses in the colony, disruption of the normal activities of the bees, and potential colony collapse.

In a survey of 4,500 apiaries in England and Wales in 2010 and 2011, the NBU screened for eight known honey bee viruses and found only low levels (BBKA News, 226, pp 47-48, February 2019), but the most commonly detected virus was deformed wing virus (DWV). This virus used not to be particularly aggressive or damaging and was passed by vertical transmission from the queen to her offspring. However, the varroa mite transmits the virus horizontally from bee to bee, and this has not only increased the rate of transmission, but has changed the way the virus behaves, making it more damaging to bees. As there is no treatment for the virus itself, or indeed for the other viruses that affect honey bees, the only way to limit the damage is by managing the varroa levels to keep them below the level where harm is likely. This is not easy, as the mite has developed strains with resistance to authorised varroacides, and there is always the risk of contaminating the hive products.

An interesting recent development has been described in a paper published in Scientific Reports 8 in October 2018 by Paul Stamets and colleagues at Washington State University (Extracts of Polypore Mushroom Mycelia Reduce Viruses in Honey Bees). This paper describes research into possible antiviral activity in exudates from bracket fungi that grow on trees. The work was also described in an article for the New York Times Opinion | Will Mushrooms Be Magic for Threatened Bees?. As far as we know, the work has not attracted notice here in the UK.

Honey bees had been observed feeding directly on exudates from fungal mycelia, and it was speculated that they might be gaining nutritional or medicinal benefits. The researchers evaluated extracts from the mycelia of several polypore mushroom species for activity against two major honey bee viruses, DWV and LSV (Lake Sinai virus) both in the laboratory and in field studies. LSV was first identified in 2010 in the US and is now widespread in US honey bee colonies. In laboratory experiments, bees were fed the extracts in sucrose syrup at two different concentrations. As a control, extracts were taken from the fungal growth medium, birch wood. After feeding on the extracts, samples of bees were frozen and homogenised for extraction and analysis of nucleic acids using a technique called qPCR for quantification of viral RNA. Primers specific for the two viruses were used.

The results were rather spectacular, with a significant reduction of DWV in caged bees by over 879-fold in one trial for a 1% extract of the fungus Fomes fomentarius compared with the sugar syrup control, and in LSV by 499-fold from an extract of Ganoderma resinaceum.

In field trials, using 5-frame colonies, with bees divided from a common population, bees were sampled for virus levels at the start of treatment and 12 days later after feeding the bees with fungal extracts mixed into sucrose solution using in-hive feeders. Colonies fed extracts from G. resinaceum fungus exhibited a 79-fold greater reduction in DWV and a 45,000-fold greater reduction in LSV compared to controls fed only with sugar syrup.

The fungi tested in the US do grow in Britain, but in any case they can be cultured in the laboratory. The researchers at Washington State are considering setting up a non-profit organisation to supply mycelial extracts, together with bee feeders, for people to put out in their gardens to help protect both honey bees and wild bees from viral infections.

This work does not seem to have been picked up by Kirsty Stainton in her recent article in BBKA News referenced above, but I feel that it could be of sufficient importance to stimulate critical discussion and further research.

Scientific Reports is an open-access online journal published by Nature, with a very wide reach. Articles are peer-reviewed with a 56% acceptance rate and stringent standards. This paper has passed those tests, but perhaps some debate and experimentation by beekeepers would help confirm the usefulness and importance of the findings.