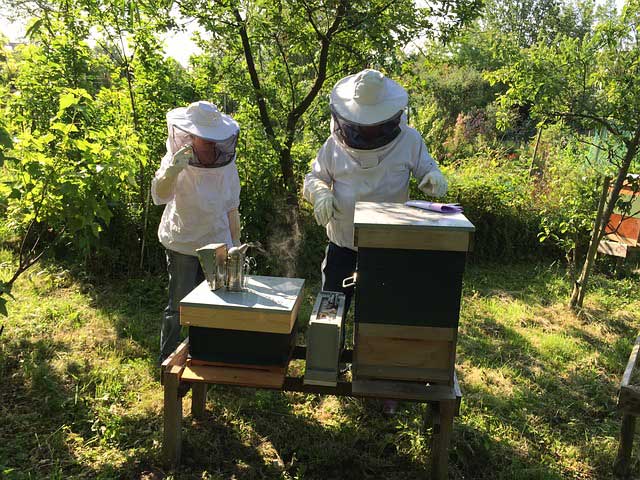 There are numerous good sites offering sound advice about how to source your first bees.

This is simple sound advice and can be expanded on by further reading.

You can ask other bee keepers, but remember the old adage if you ask three experienced beekeepers the same question you will get at least 5 answers.

Do not be dismayed – one lesson in bee keeping is that there is always more than one way to do something.

I hope to offer a little insight in the way of mistakes I made.

In my work, when I was training, I was used to reading and being shown new skills and having to learn to apply them very quickly. I had always wanted to keep bees and when my son was enthused by a friend who lives in a neighbouring village we decided we would do it. Now!

We both read Ted Hoopers book Guide to bees and Honey (much recommended). Kit was ordered (much inappropriate and at a ridiculously excessive cost -buying equipment something later in the website). I contacted a beekeeper in Gloucester to buy a nucleus. He filled me with confidence but told me in July better to have a full colony as nucleus would not build up and I would probably get honey if I had a full colony. I now wonder if he simply did not have a nucleus or preyed on my naivety.

I got the colony home and sited it at the end of my very long garden, one suitable choice. I opened the hive expecting the bees to stay nice and clam like the books said and the pictures. They seemed everywhere. I closed the hive in a panic.

I then did the first sensible thing in my far from illustrious start to beekeeping. I found the phone number and rang Bruce Roberts the secretary of the local beekeeper branch. Once he had expressed concern that firstly someone had sold me a complete colony in July and secondly I had taken on a bee colony having never handled bees (which he did very politely but firmly, leaving me in no doubt about my lack of wisdom) he was a fantastic mentor.

I was allowed to go to branch apiary meetings where I gained experience both handling and observing. I also did the introductory course over the winter. My colony survived the winter, despite me and although I still needed help from experienced beekeepers that season (and still do sometimes) I was able to progress and generally handle our bees.

If the message is not clear. Before you get bees my advice is:

In the spring I went to the BBKA spring convention (there are often interesting workshops for beginners and experienced beekeepers as well as many interesting lectures). Waiting for a lecture to start I chatted to a very experienced beekeeper. I told him where I had obtained my bees. He immediately warned me that it was likely my queen would fill the box with brood and run out of space and be very likely to swarm. It was a shock. It was the first I had heard of or thought that queens were that different. I did wonder about sour grapes. But she did swarm and I had to go on double boxes. Double boxes is another story but suffice it to say another complicated level of beekeeping I did not need in my first season. Again Bruce helped me through.

Message – most commercial beekeepers I have met either use hives much larger than the standard national or use a double box. There queens are bred to fill this space.

In my second year we decided to buy two colonies. I keep bees with my son and we were aiming for two each. I ordered them went off to Gloucestershire again. I still had not learned enough. The bees had to be collected. I paid and left with the two colonies.

I only had time to literally set them up before having to leave to work away for a week. My son rang me to say why had I only bought nuclei. Both hives had 5 frames of bees, stores brood etc. and 6 blank new foundation frames. Diddled is the phrase. It was only later l learned that the correct time to move hives is in the early morning or late evening before when all the bees are in. moving in the middle of a warm day leaves all the foraging bees behind. Obvious when you think about it.

Our third foray into buying colonies came when an advert offered hives from a retiring bee keeper. We met the lovely very elderly chap. Long yarns of keeping bees for 60 years. The bees seemed good natured. There were in fact two almost full supers on each hive. He would not allow inspection. He had other people interested in purchasing the hives and they could not be inspected repeatedly. He assured us they were healthy and queen right when he inspected them 2 days previously.

We collected and installed them. Did an inspection a few days later. The super frames had been replaced with blank foundation, the brood chamber was a horror. The oldest dirtiest wax I have ever seen. The bees did not do well. A varroa drop count showed huge varroa levels.

Bee keeping is a great hobby. In general amateur bee keepers are enthusiastic gregarious people who welcome new bee keepers. There is lots of help available. However, it easy to be put off. The idea of exposing my own errors is help you not fall into the same traps and become despondent. Do not do it like we did do it the right way, the conventional way.