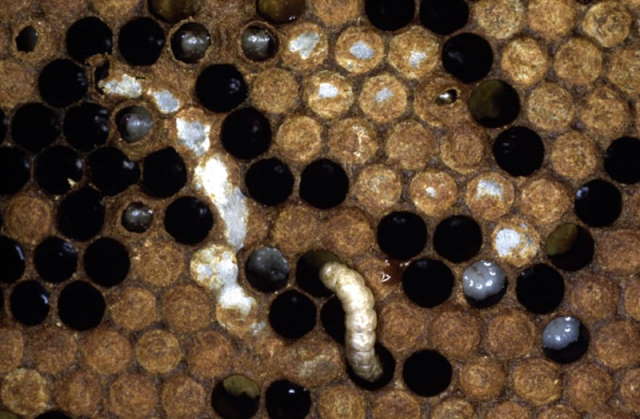 Hopefully, most of you will have managed to at least start your varroa treatments, but there is still time to do so early in September if you are a bit behind. You can do this while temperatures remain relatively high.

Last month I mentioned Kirsty Stainton as a good source of information about Varroa and she has now published a book on ‘Managing Varroa’ which the RKBA has just purchased for the Library.  If you would like to borrow this book, or any other book, please come along to the next meeting in September and talk to Gail Plester who runs the Library.

The library is a good source of information to widen and improve your beekeeping. We also have a new book on ‘Honey Show Classes’ by John Goodwin for those interested in entering Honey shows.  Warwickshire will be holding their Honey show in October and I would encourage you to think about participating as it is a good opportunity to learn more about preparing different sorts of honey also other products such as mead or cooking with honey and wax products.

Just a reminder for those who extracted honey this year, do be aware that your honey should be correctly labelled (I am informed that even if you give honey away, your labels should comply with Honey Regulations).  We have article detailing what you need to have on your honey jar label.

Now is the time to ensure your bees have sufficient stores to keep them well fed during the winter - remember this can stretch through to March or April. If you are near ivy this is a surprisingly good source of late nectar.  Looking at the ivy flower it is hard to believe that it produces anything significant. However, you will find older ivy covered with bees - usually in October, but it is likely that this year with the warm dry conditions that have persisted into late August, that the ivy will flower early.  While ivy nectar is an important late food source for the bees it also has some drawbacks.  Ivy nectar will crystallise quickly and tends to be very hard, making it difficult for the bees to use later in the winter so it is good for it to be mixed with other nectar if possible.

We don’t yet have Indian or Himalayan balsam in this area which is a good source of late nectar, so we are reliant on Dahlia, Michaelmas Daisies, Hebes and Sedum for the bees to supplement the stores you have hopefully left them to overwinter on. Of course, you can also feed sugar syrup to ensure they have sufficient stores.  This means that in a National broodbox you would be overwintering on at least 8 full frames of stores or a full super and 3-4 full brood frames of honey.

Remember when assessing winter stores to ensure that your bees have pollen and honey as pollen contains the protein, minerals, vitamins and lipids essential for their health.  If they don’t have sufficient, brood can’t be reared and workers will die early.

You will now also need to store supers that have been extracted. Although it is often suggested that wax moths are only found in frames that have had brood in them, I have not found this to be the case.  If you can, place frames in the freezer for 48 hours then stack supers carefully with no gaps, on a flat surface, and cover with a solid board so that moths cannot enter.  The lesser wax moth can get through quite small apertures and apparently chews through plastic, so storing frames in bin bags does not work.