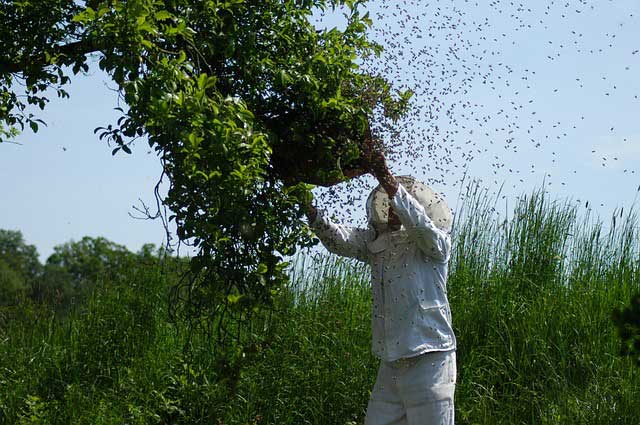 June is the ‘silver spoon month’ for swarming. The old adage of ”a swarm in May is worth a load of hay, in June a silver spoon, and in July - not worth a fly” means that swarms caught this month have the potential to form a colony strong enough to get through the winter, and maybe even give some honey.

Catching and re-hiving swarms is not only good for the beekeeper, but means the bees don’t re-hive themselves in someone’s chimney or fascia board and need to be destroyed. Also, it is good for the bees, as the well-respected author and researcher Tom Seeley, estimates that only 25% of ‘wild’ swarms survive into the next season.

Even the most conscientious beekeeper who scrupulously carries out good swarm control and prevention may find that they have, and loose, some swarms. The urge for reproduction is so strong that it can only be curtailed to suit the beekeepers’ needs to a certain degree. Perhaps our teenage pregnancy rates reflect a similar urge!

Having done a pre-emptive split on one of my hives this year and not being the most conscientious beekeeper, I was a bit late checking the hive from which I had removed the queen in order to select and cull the queen cells that had been drawn out. Consequently, there were a number of sealed queen cells, but no open ones. Contrary to my usual practice of only leaving one queen cell, I decided, as sometimes a sealed cell can be empty or not have a healthy larva in it, I would leave two cells as a fail-safe measure.

Predictably, I was called to my out apiary to collect a swarm, and then annoyingly, a day or two later another swarm. Obviously, I had missed yet another concealed cell apart from the two cells I had deliberately left. Both these swarms were in a flowering cherry tree, somewhat higher than I would have liked ( I have now decided that teetering on the top of a ladder holding a box in one hand and a rake with which to pull and shake the bees into the box in the other is getting beyond me at my age!). On both occasions, the bees returned to the location in the tree and needed to be recaptured - in the case of the second swarm - several times.

As the queens in both these swarms took about a week to start laying I was fairly certain they were both virgin queens, so technically these ‘swarms’ were ‘casts’, so I wondered if ‘casts’ are harder to capture. Over the years, when capturing swarms, I have found some seemed resistant to remaining in my well-appointed swarm box, despite its odour of wax and rain resistant exterior and warm interior, so I am wondering if a swarm headed by a virgin queen who has yet to fully develop her queen pheromone and is more ‘flighty’, is harder to persuade to stay in the box and not return to the tree? Are casts ‘flighty’ too? This is what makes beekeeping endlessly fascinating!

Apart from June being a swarm month, it is also the month for the Dunchurch Festival where the RBKA usually have a stall, where we talk to the public about bees and beekeeping, and sell some honey. Please consider coming along to help out for a couple of hours. It is an enjoyable day out and gives the opportunity to share what you know about bees - no matter how new you are to beekeeping, rest assured, you know a great deal more than the average citizen. Contact Martin or me if you can help and we will pass your details on to Helen Ireland who is organizing the event.