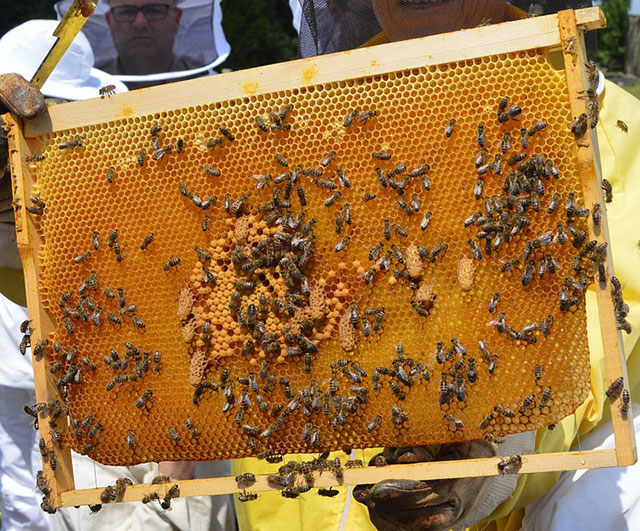 Perhaps you were as confused as I was between the Coloss colony loss survey and the BBKA survey from Leigh Sidaway. Hope you managed to do both as the information for Coloss will go towards a Europe wide survey whereas the BBKA one is UK wide. A bit like Brexit talks, it would be good if they could co-operatate and co-ordinate their efforts.

When I first started beekeeping I formed the impression that if a hive hatched more than one queen the first to emerge would either seek out rival queen cells and sting the occupants to death, or if a rival had already emerged they would fight and there would be one surviving victor. Well, as with everything in beekeeping I have slowly learnt that the situation is much more complex than that.

As we are now in the thick of the swarming season it will become clear that if there is more than one queen cell in a colony it is very likely, not that there will be a duel between queens, but that there will be another swarm - a cast or after swarm. In fact if you have inadvertently missed a well hidden queen cell, you could have more than one cast. Bees are remarkably clever at concealing the queen cells, and even if you carefully shake or brush off bees to examine the combs there may be a cell lurking next to the frame-side or in an irregularity in the comb.

When doing the traditional Pagden swarm control method there will be a lot of bees emerging from the brood and the colony will soon again become congested, so when a virgin queen is able to fly she may take off with half the bees. So once again, as with everything in beekeeping try to consider what is happening, or may happen, in the hive and take appropriate action. But, be prepared to be surprised, and then try to work out what has happened. That way you may increase your beekeeping skills!

The BBKA Spring Convention at Harper Adams university again proved a worthwhile and interesting outing - hearing about some of the current research findings and taking part in workshops always gives me a buzz and makes me keen to know more and be a better beekeeper.

The most illuminating and enjoyable lecture for me was given by a young black American researcher, Samuel Ramsey who for his Phd explored what varroa mites actually feed on. Traditionally we have been told that the varroa mite fed on the Haemolymph (blood) whereas Samuel demonstrated conclusively with some amazing microscopic photography that the mites on adult bees were feeding on the bees’ fat bodies. The varroa mite wedges itself between the intersectional plates on the abdomen and pierces the cuticle, underneath which lies the fat body. The mite releases a volume of saliva into the fat body to break it down and it then consumes the tissue. Because the fat body regulates the bee’s metabolism this disrupts a whole range of functions from protein synthesis to temperature regulation, immune functions and the critical vitellogenesis which is important in prolonging the life of winter bees. So….important to control varroa if we want healthy, long lived bees.

We will be doing some Apiary sessions over the Summer which I will list on our Events page, so do come along if you are interested.
Also if you can offer some support at the various events we are doing, please let Rowan know. Even if you can offer a few hours, it gives others a break.
Also a reminder about the Sustainable Market at St Andrews Parish Church - this month on Sunday 19th May - 10am - 3pm.