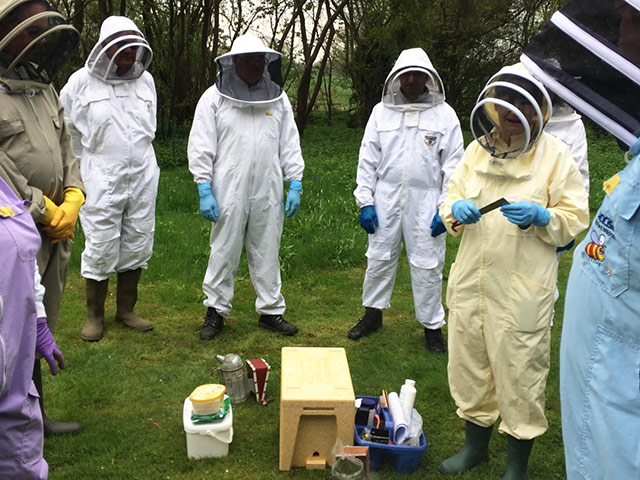 The Sun shone as we all arrived. Lots of anticipation and excitement as we all donned our suits and walked over to the Apiary. We started with a briefing from Margaret around safety and dos and don’ts. We then all had the opportunity to light our Smokers and get familiar with smoke control and some good tips on what to use.

We made our way round to the Apiary. There are three hives, unfortunately one had not survived the winter and we will have an update on the cause a little later in the season. We split up into two groups.

Sam P. took one hive and Margaret the other. Sam’s group were greeted with a busy hive lots of brood, capped and uncapped, capped honey (plenty of stores). The inspection board showed signs of a high varroa count and last year’s records would be checked as to review treatments and next steps. We found the Queen, caged her and then proceeded to pop her back into the brood box and the queen excluder in place. The Hive records were updated and the Hive closed.

Margaret’s group, again greeted by a busy Hive, no Queen was spotted, but again lots of brood, and stores.

Both hives had a good temper considering the conditions and it had been the first time this year they had been inspected.

I forgot to mention the downpour in the middle of our inspection, but that did not dampen spirits and the bees did not appear to bothered.

I would encourage any new bee keeper to attend the sessions. It is a good way to network and learn, grow in confidence in preparation for becoming a competent bee keeper.

Please visit our Events page for up and coming events and Apiary Days - you want be disappointed.