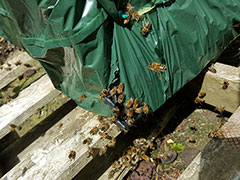 I sealed some old frames after a bailey comb switch in a thick green bin bag. To store until I had made a homemade steamer to melt the wax out. This was left outside the bee shed.

Later, I walked around the corner to see a mass of bees. It seems I had caught the bag with the lawnmower making a hole in the corner. It appeared a small swarm was going in.

Read more: The queen who walked home.
Page 2 of 2