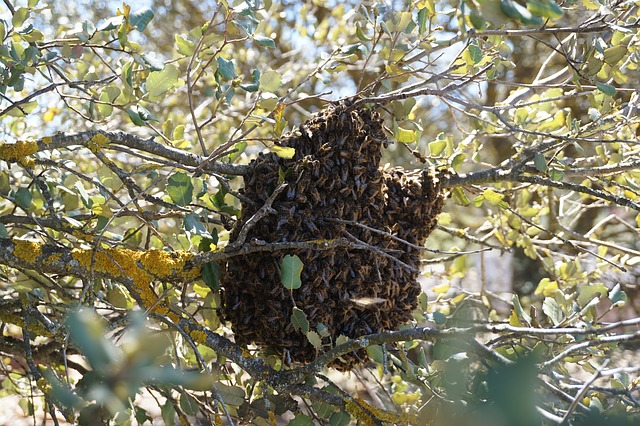 My first collection request came as a bit of a shock.

It was only my second summer when I found an answer machine message out of the blue from a very worried couple who had been given my phone number. That happens a lot.

I frantically thought through everything I had read or heard about swarm collecting. Ran around collecting bits and pieces while I rehearsed the whole procedure in my head. Then I called them back being very reassuring, I hope.

Fortunately for me these were nice literate bees who had read the right books. They were about four feet from the ground in an apple tree, close to the lawn (not many people appreciate their flower beds being trampled). They fell happily into my box and I shared a cup of tea while I waited for the stragglers to follow the queen.
Not all bees are so cooperative.

Last summer my second career as a swarm collector really took off, beginning with a friend who keeps bees but doesn’t join groups. To coordinate my day and hers we arranged for me to pop over about 6.30 the next morning. Again, well-read bees, cooperated and stayed in the box.
If only the trend had continued

My experience of those calling with a swarm is that they fall into 3 main categories;
The folks who point the swarm out in their garden and then go back in their houses never to be seen again. This is the smallest group.
Then the largest group, interested, watch, chat and make lovely tea. They are a delight but are generally happy to see the back of the bees and beekeeper. An hour or two is fine but all day? No.
Finally, those who are happy for the beekeeper to set up, establish the queen in the box, then buzz off to return in the evening.

Ideally, while a swarm can be encouraged to occupy a box at any point of the day, collection should take place as late in the evening as the householder will tolerate. Swarming for very obvious reasons takes place during the time of warmth when there is a good flow on. In Britain this is also the times of the long days. While I have no intention of travelling around at 10pm, it is probably the best time.
But I was aware that in my first two seasons of collecting I generally scooped and ran. Leaving a fair number of bewildered foragers and scouts returning to find they had been abandoned. Guilt set in. I decided I would, where possible encourage the householders to see the advantages of an evening pickup.
This turned out to be a double edged sword, costing a fair amount of petrol and several times, no bees.

The first such occasion involved a trip over to a nearby village, the swarm had apparently emerged from the hive of a bee inspector. I thought that I would enjoy collecting well raised and well treated bees. They were happily hanging in a Holly tree in a magnificent garden. They seemed to like my skep and settled quickly. Chatting with the owner resulted in an invitation to return early evening for collection. When I returned he said they have been quiet since about 3pm. Quietly elsewhere I discovered when I checked the now empty skep.

Some swarms are happy to come back to the homestead for a spot of bed and breakfast. But then feel the need to explore pastures new. One such, stayed for a week, ate their way through pints of syrup and then felt Brinklow wasn’t for them. Ungrateful critters!

My personal favourite collection of this season was recently. A Friday, the end of a long swarm filled week. I explained to the caller I would find someone who lived closer than I did to go over. She, in turn, explained she had called every number on the BBKA website, that this was the second time she was trying all those numbers, additionally she was alone in the house with a toddler and nine months pregnant.
Ok, on my way.
I did defer collection time until evening. Good plan as it turned out. I toddled over about 7pm, in the company of my favourite bee-bothering companion,Peter, fortunately as it turned out.

The bees looked very accessible, 3-4 ft from the ground in a nicely trimmed tree. I explained to the family what I planned, they settled in the bay window to watch safely. I thought we would be in and out and home by 8. However…

Swarm collection revolves around safely getting the queen. Once her majesty is settled, bees will follow. Of course, if madam decides to stay hidden behind a twig or a leaf, then all those bees who so easily dropped into the box very quickly return to join her. That was what happened here. All the bees down, stand back to wait. All bees back to the tree. Three times.

The tree had myriad tiny twigs all intertwined, impossible to get fingers or a brush into. The owner , understandably, didn’t want us to mess with the look of the tree, it’s matched partner was on the other side of the front door and I suspect it had taken a while to train. Despair was arriving in equal measure with the encroaching darkness. Then a thought struck, did they have a car vacuum?

They did, as did the neighbours who had joined us to watch. The neighbour’s vac won the day, we gently slurped the inaccessible bees into the box, shut the lid quickly, then went back for more, suddenly the demeanor of the bees changed and they wanted to get into the box. In no time at all we were on our way home.

Peter now has a designated winter project of designing a portable, gently bee slurper for next summer’s adventures!