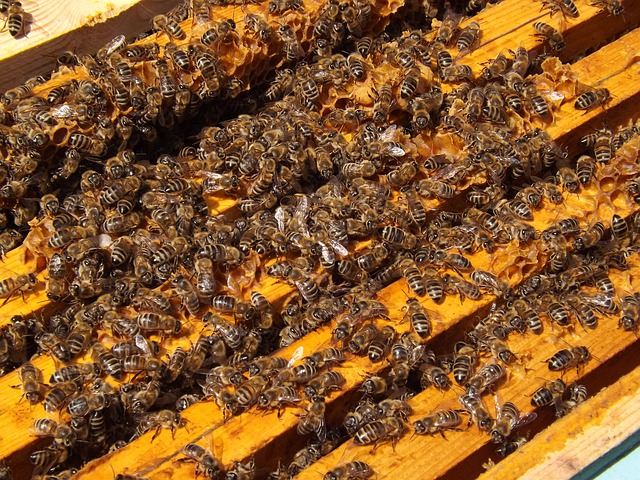 Hive number 8 came through the winter well. However. It became apparent that the colony was not building up.

The queen appeared sluggish and the laying pattern was not all it could be. I decided to introduce a new queen from British stock from an acknowledged breeder.

The queen was introduced in the appropriate way. I dispatched the old green queen on my branch – the myth being if you squeeze the queen on a branch this will form an attraction for swarms to attach– 4 queens over last 4 years no good so far.

When I checked a week later much to my frustration the new queen was nowhere to be seen. I closed the hive to sort out next week. The bee inspector was coming in 3 days.

I was telling the inspector of my bad luck in losing my new queen as he inspected the comb. He simply pointed out the queen, not the new marked one.

The colony had presumably also realised the old queen was failing and superseded. It appeared the two queens had fought as the right rear wing was somewhat chewed and not moving correctly. But she appeared to be laying well.

Sadly the ending was not happy. Wonky winged queen stopped laying as well and on inspection had a paralysed right rear leg. The poor pattern because many of the eggs were ending up at the side and being removed by the workers.

She has had to be replaced and has gone to the tree of swarms.